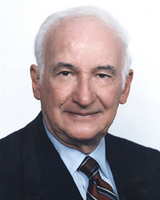 Simon Ramo, EE Ph.D. '36 and Life Trustee of Caltech, has been awarded the Goddard Memorial Trophy.  This award is the National Space Club’s preeminent award and it is given annually to recognize significant contribution to United States leadership in the field of rocketry and astronautics.

Dr. Ramo has been involved with the creation of two Fortune 500 companies of the 1970s; Ramo-Wooldridge (TRW after 1958) and Bunker-Ramo (now part of Honeywell). TRW was a pioneer in multiple fields including electronic components, integrated circuits, computers, software and systems engineering. TRW built many spacecraft, including Pioneer 1, Pioneer 10, and several space-based observatories. [Learn more]