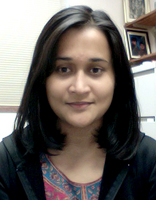 The paper explores the idea that when a signal is sampled with two sets of coprime samplers, it is possible to start from sparse sampling-sets and recover a much denser set of autocorrelations. This scheme originated in an earlier paper by Prof. Vaidyanathan and Piya Pal. Piya's prize paper shows how to apply the so-called MUSIC algorithm to such a set of spatial samples (taken with a pair of sensor arrays), in order to estimate the directions of arrival of multiple signals in space. The breakthrough is that, using a very small number of sensors (say N) it is now possible to identify a very large number of uncorrelated sources (nearly N2) arriving simultaneously from many directions in space.