Students in Professor Hillary Mushkin’s new media arts seminar (E/H/Art 89 New Media Arts in the 20th and 21st Centuries) have put on a unique exhibition highlighting art and engineering. The course provides a platform for an expanded understanding of engineering and an active, project-based engagement with art history.

The projects included an installation by computer science student to experiencing the Ganzfeld effect which is a sensory deprivation phenomenon caused by exposure to a uniform field of information. Another exhibit called Peltier’s Box employed three Peltier thermoelectric generators to generate light from body heat. A third installation in the shape of a ball was made by electrical engineering students. This kinetic light form was made by spinning a series of light emitting diodes at high speed in a set of two concentric circles. Using pulsing and timing of the lights, various light forms were created. [List of all projects] 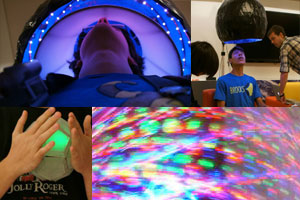